Jubilee of the Sokołów Group 20 years of development and investment 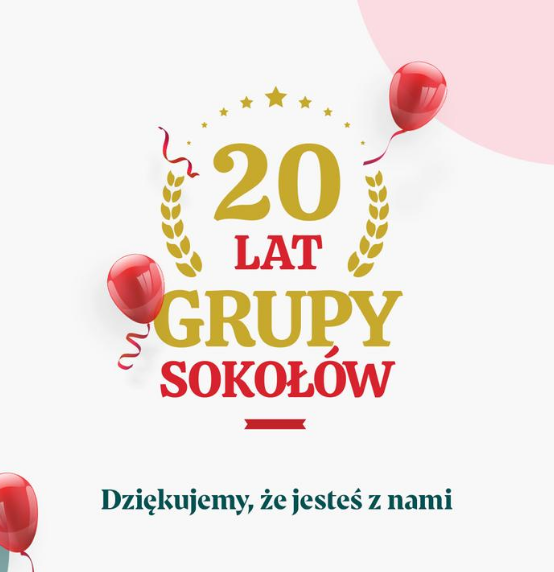 2020 is a special year for the Sokołów Group, as the company is celebrating its 20th anniversary. It is related to the anniversary of the merger of the Farm Food Group companies with the Sokołów Group, which took place on September 1, 2000. This merger gave rise to one of the largest and most modern meat and processed products producers in Central and Eastern Europe. For 20 years of operation on the market, the Sokołów Group has been systematically developing. A planned strategy and well-thought-out investments allow to increase production capacity and sales value. Sokołów is the undisputed leader in innovation, effectively combining tradition with modernity in its activities. The Group has achieved and consolidated a strong position on the domestic and foreign markets and remains one of the leaders in the meat industry in Poland.

In 2001, a new Management Board was appointed, chaired by President Bogusław Miszczuk, operating in an almost unchanged composition to this day. Many years of efficient cooperation, practical knowledge of the industry, rich experience of all members of the Management Board contribute to the effective management of the company on a daily basis. In 2006, Saturn Nordic Holding AB became the main investor of the Group, and then, in 2014, the main shareholder of the Sokołów Group was the international Danish Crown Group - the largest meat exporter in the world and the largest meat processing company in Europe.

The Sokołów Group is constantly increasing its production potential. Over the course of 20 years, in addition to key investments developing plants, the Group has grown to include Pozmeat plant in Robakowo (2007) and acquired the companies of the Gzella Group in 2018. In June this year, at the Sokołów S.A. branch in Osie, a new poultry processing plant was launched.

Successes in a fluctuating economic situation

Despite the many challenges common to the entire meat industry and the changing market conditions, the Sokołów Group has managed to maintain dynamic development, which is confirmed by the increases achieved in all significant indicators. Over 20 years, sales value increased by over 700%, and the volume of sales increased by over 570%. Sokołów products are available in over 40 countries around the world. The Sokołów brand has been one of the most valuable Polish brands for many years.

Employees - the driving force behind Sokołów

Today, the Sokołów Group employs almost 9,500 people, which, compared to 2000, means an increase by almost 4,500 employees. As emphasized by the President of the Management Board of Sokołów S.A., Bogusław Miszczuk, it is the employees who stand behind the Group's success. - The heart of Sokołów are undoubtedly the people who work here - says Bogusław Miszczuk - They deserve recognition and thanks for their active participation in the development of our company. The knowledge, experience and everyday commitment of our employees are of the greatest importance in achieving such good results by the Group.

The Sokołów Group has always focused on innovative solutions in production technology. From year to year, investments in the Group's production plants are steadily growing, thanks to which all plants of Sokołów S.A. are among the most modern in Poland and Europe. Sokołów is constantly expanding and modifying its range of products, adapting it to the latest nutritional trends and consumer needs. Every year, a wide range of new products is launched, and among the well-known and respected lines are Naturrino (a line of natural cold cuts), Sokoliki (a dedicated line of products for children, without preservatives and artificial additives), Snacks & Chips (delicious meat snacks), Qulinary Feast (matured beef from Sokołów), Premium Poultry (top-quality poultry processed products), Gzella - cold cuts from Bory Tucholskie, Z Gruntu Dobre (line of plant products).

One of the key elements of the Sokołów Group's development strategy is social responsibility, which is expressed in numerous pro-ecological activities, support for local communities and sustainable food production. Technological innovations introduced in individual plants of the Sokołów Group allow for an effective increase in energy efficiency while reducing the consumption of water and energy resources and a significant reduction in CO2 emissions. - From the very beginning of the Group's existence, we adopted a development direction that is consistent with the care for the environment - says Bogusław Miszczuk, President of the Management Board of Sokołów S.A. - On the occasion of our jubilee, we want to contribute even more to the protection of nature, which is why it is with great pleasure that we will soon be planting 20,000 trees.

Plans for the future

The Sokołów Group's plans for the coming years include further dynamic development of the plants so that they are able to meet new market challenges and consumer expectations. - These 20 years were undoubtedly a period of hard work, but also great satisfaction - emphasizes Bogusław Miszczuk. - I am proud that our efforts bring about the trust that millions of Poles have placed in us, who reach for our products, appreciating their quality and taste. I am convinced that we have another equally wonderful jubilees ahead of us. The stable, strong position of the company and the potential of our employees allow me to look to the future with optimism.